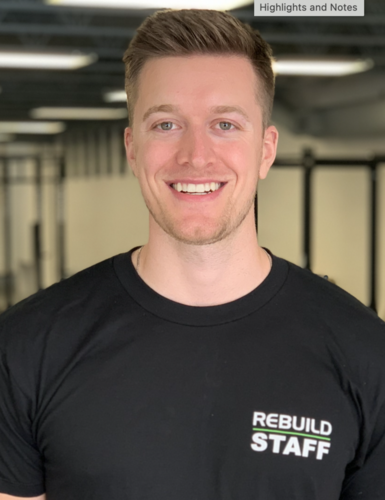 Nevinn began his fitness journey at a young age, staying late after school to train with his high school gym teacher. In 2015, Nevinn took his passion to the University of Guelph’s 4-year Kinesiology program where he continued to develop his training knowledge through working at the Guelph Gryphon’s Athletic Centre as a weight room supervisor. Additionally, he worked in the Spine and Muscle Biomechanics lab in his fourth year where he learned how to apply his knowledge of spine health to lifting mechanics and injury risk. After seeing the power of movement and exercise to maintain and rehabilitate health, Nevinn then pursued a Master of Science degree in Physiotherapy at the University of Western Ontario where he graduated in 2021. Since, Nevinn has joined the Rebuild Fitness and Physiotherapy Staff and has loved every minute! He is happy to be back in the area and recommends eating at the Bread Bar if you’re ever through Guelph.

Nevinn has been active since a child, as he grew up on a dairy farm just outside of Guelph. He also played many sports growing up including Hockey, Soccer, and Volleyball. Nevinn suffered an ACL injury in his knee when playing hockey, and his father suffered an ACL injury on the farm. A firm commitment to exercise and leading an active lifestyle are what he believes have contributed to his return to sport and his father’s continued physical health on the farm at 62. Nevinn enjoys the outdoors, going to the gym, and spending time with family and friends.

Nevinn’s mission is to help others find their path to recovery with an in-depth physical assessment and targeted treatment plan specific to their goals.

Master of Science in Physiotherapy - University of Western Ontario

Shoulder pain due to rotator cuff strain/tears and impingement

Upper/mid back pain due to knots, tight muscles

Low back pain due to repetitive strain, disc irritation, sciatica

Ankle pain from a sprain, achilles or calf issues.